Everything you need to know about AUGUSTA NATIONAL Golf Club – Home of the MASTERS!

What, why, and how is this place just SO amazing?  It’s one of those unexplained fascinations in golf that you just FEEL but can’t explain.  You can’t put into words WHY or HOW this “feeling” exists but as we dive into one of the best golf courses in the world – we can start to understand “why”.

Give me a few minutes of your time and I will examine the “mystique” of Augusta National and why each year it grows in us and in the golfing world.

The Masters isn’t just a tournament it’s a “feeling” that even the most casual golfer feels. 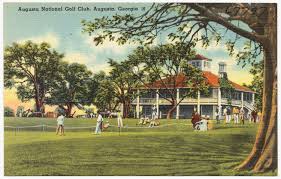 Augusta National is located in Augusta, Georgia a few hours east of Atlanta.  It was founded by Bobby Jones and Clifford Roberts on the site of the former Fruitland (later Fruitlands) Nursery.  It was designed by Alister MacKenzie. Alister has designed 50 courses highlighted by Augusta National, Cypress Point Club in the USA, and Royal Melbourne Golf Club (West Course) in Australia.

Augusta National opened in 1933 and in 1934 became the host of one of four major championships in golf – The Masters.  Augusta National is arguably one of the best courses in the world! 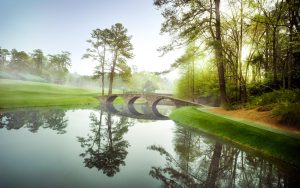 Definition of Mystique – a fascinating aura of mystery, awe, and power surrounding someone or something.

Alight, now it sounds like I am being touchy feely right?!  Well…You’re right, I am!  Don’t worry, I am going to try to explain the reason behind the mystique and hopefully make you appreciate this course even more!

There are numerous features that I could point out which would make this blog 10,000 words.  Instead I will highlight what I think are the best of them, based on my experience and research, and hopefully you’ll agree! 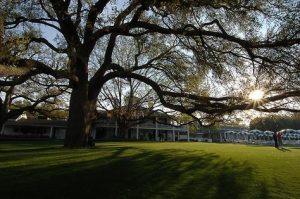 The big oak tree sits near the clubhouse and it has been said that it “watches” over the club house.  You can understand why because its now stands over 55 feet tall and it’s limbs stretch 95 feet (that’s a third of a football field) from one side to the other.  The tree’s diameter is 5 feet 5 inches round (bigger than the width of an average car) making it one of the larges oaks in the United States.  The estimated lifespan of an oak is 200-300 years but Augusta National is helping it a bit to reach an even longer life with some cabling support and preservation. 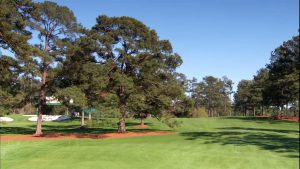 Some call it “Eisenhower’s Pine” but I like Eisenhower’s Tree better. (plus it’s also more popular.)  It used to be located on the 17th hole 210 yards from the tee.  President Dwight D. Eisenhower, who was a member at Augusta National hit that tree so many times that he proposed that it be cut down.  The board successfully lobbied President Eisenhower against this and kept it in play.

Unfortunately in 2014 was eventually cut down due to an ice storm.  Not to worry though Augusta National Golf Club saved two grafts and a seedling from Eisenhower’s Tree and eventually will replant it.  A location has not been determined yet.

Why are you highlighting something that no longer exists?  Good question.  When Augusta National finds the perfect location to plant Eisenhower’s tree in the near future, you will have details around this and understand exactly what everyone is talking about! 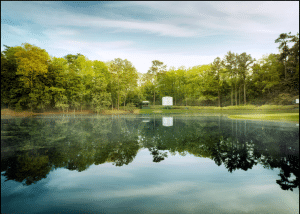 Ike’s Pond is a spring-fed, three-acre pond on the eastern part of the Augusta National Golf Club grounds. Number 8 and 9 holes play around Ike’s Pond.

Ike’s pond is man-made, and named after World War II General and United States President Dwight D. Eisenhower who suggested its creation.  Eisenhower loved to fish and suggested to Augusta National founder and chairman Clifford Roberts that building a dam to impound the spring would create such a great fishing hold.

Roberts liked the idea. The dam was built right where Eisenhower suggested, and Ike’s Pond was created.

Rae’s Creek is named after John Rae who’s home was built on the creek and died in 1789.  In 1765 Rae built a Grist mill on the banks of the creek and was used as a fortress that kept local residents safe against Indian attacks. 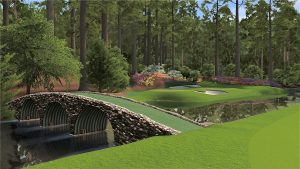 I LOVE Ben Hogan and you should to.  Not because he was the best golfer of all time (I guess some would argue that point) but because he believed in EXCELLENCE in every aspect of life.  Ben Hogan won the master’s in 1953 with then a record score of 274 which prompted Augusta’s leadership to name the bridge after Ben Hogan.

Hogan’s bridge spans across Rae’s Creek and is topped with artificial turf.  His bridge allows players to cross Rae’s creek and get to the 12th green.  A plaque was placed at the mouth of the bridge to commemorate his record.

“This bridge dedicated April 2, 1958, to commemorate Ben Hogan’s record score for four rounds of 274 in 1953. Made up of rounds of 70, 69, 66 and 69. This score will always stand as one of the very finest accomplishments in competitive golf and may even stand for all time as the record for The Masters tournament.”

Unfortunately Ben Hogan’s record held up for just a few years as Jack Nicklaus bettered that score in 1965. Tucked away in the corner of the Cathedral of the Pines, Amen Corner is the most notable mystique of the masters.  Augusta National does not shy away from the religious references within their golf club as they respect the foundation and history of their course.

Amen Corner is a breathtaking piece of golfing history which stretches from holes 11, 12, and 13.  It is an iconic stretch of holes and the Mecca for golf fans as well as Master’s players.

Amen Corner was first used in print by author Herbert Warren Wind in his April 21, 1958, Sports Illustrated article about the Masters that year.  He was simply looking for a catchy phrase for his article.

Since then, Amen Corner has been know as the place where players get their prayers answered (sometimes) as in 1958 when Arnold Palmer outlasted Ken Venturi to win the tournament with a heroic escapes at Amen Corner.  in 1937 Byron Nelson’s bridge – eagle at the 12 and 13th in the 1937 masters.  Sam Snead’s water save at 12 in 1949 that sparked him to victory.

On the flip side it appeared Jordan Spieth’s prayers were not answered when his quadruple bogey on 12 during Sunday’s final round in 2016 cost him his 2-stroke lead and the Green Jacket.

The gates open at 8am at Augusta National and there is a mad dash to the best spot on the course at Amen Corner.  BUT there is a “no running rule” at Augusta National so instead, you see patrons doing a speed walk to secure that prime spot!  Trust me, you don’t want to be the one caught running because you will lose your badge and be escorted off the grounds. 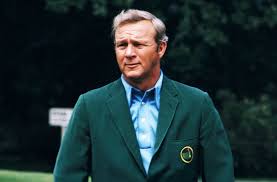 What’s up with the Green Jacket?

The Green Jacket is the most coveted jacket in all of sports.  It’s not just a jacket, instead it’s a badge of honor that only the best players in the world earn after winning the Masters Championship.

How did the Green Jacket Start?

The idea of the green jacket originated with club co-founder Clifford Roberts. Many believe it is because he wanted patrons visiting during the tournament to be able to readily identify members.  Roberts wanted the “non-members” to easily identify members who could potentially assist their guests, if needed.  It has no become an icon in the golfing world.

Another fascinating piece about the Green Jacket is that the current Masters champion is the only owner permitted to remove it from the grounds of Augusta National, and only for a period of one year.

So that means after winning the Green Jacket you have to bring it back the next year and if you don’t win the Master’s that year, your jacket stays in Augusta.  Other than that one exception no other Green Jacket is ever allowed to leave Augusta National for any reason.

Do you feel the Mystique yet?

I do.  Augusta National is truly a remarkable place where tradition, history, and competition are like none other.  For those who have experienced Augusta National first hand, I hope you appreciated just how amazing your experience was.  If not don’t worry you still have a chance to get tickets.

How do I get tickets?

Each year you can go to the Master’s website and enter your name in a lottery for tickets to the next year’s Masters.   Don’t worry if you don’t “win” the lottery because you can enter year after year.

Either way, experiencing the Master’s Championship at home or in person gives all of us that “giddy” feeling and I look forward to April every year, as the Masters is right around the “CORNER!”